DiabloDex is a game extension for Diablo II Resurrected built on the Overwolf Platform. Users with the app open are shown as online, making it easy to filter out offline users and make a quick and easy trade.

Being live gives your items more visibility than those of offline users. DiabloDex launches as you start the game, enabling trades to happen fast. The notification system enables you to focus on gameplay rather than waiting on a forum for a trade to happen.

Search through the DiabloDex to find the items you need, detailed property filters and a structured database makes it easy to find exactly the item you are looking for. 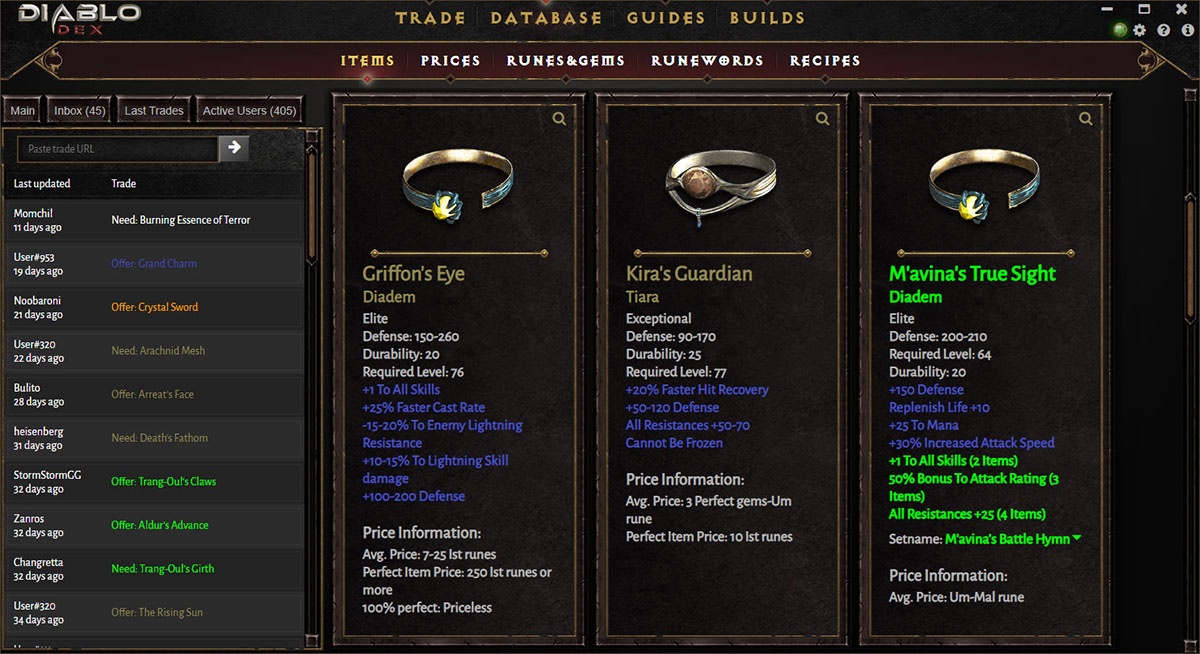 Knowing what items are worth is a big barrier of entry when it comes to trading. We have included a rough price estimate on items in our database making it easier for our users to evaluate the worth of an item.

The DiabloDex Windows App is built on the Overwolf App platform, where it has gone through rigorous testing before release. Overwolf works as a framework and game extension library, think of it as an app store for game extensions. They pick their partners carefully and test their apps before releasing them into the ecosystem. DiabloDex has to pass several testing phases to release on the Overwolf platform. Our developers are experienced with game extensions and have built MTGA Assistant for Magic: The Gathering.

Currently, the DiabloDex app is a Desktop App and is not integrated into Diablo II Resurrected in any way, other than launching at the same time you launch the game. We do not read any information from the game or launcher and all interaction happens within the DiabloDex app. In the future, we will be working with Overwolf and try to see what options we have to interact with the game. We are hoping to be able to read item information from the game to make the trading process even easier. If this happens we will also have the option of adding other cool features like automatic Holy-Grail lists (Checklist of items you have collected). However, this is a bit into the future when the game is more stable and Overwolf has done extensive testing and we are sure that it is not interfering and creating situations where accounts are banned.